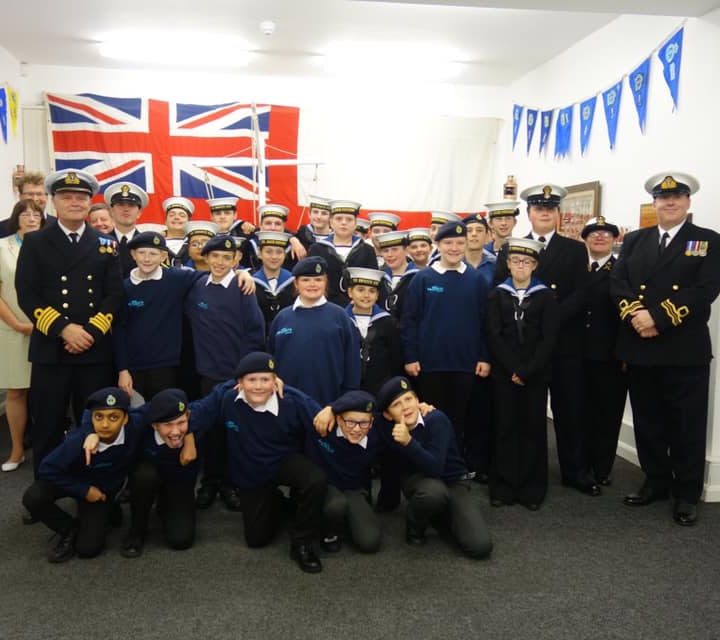 A safer future has been secured for over 30 young cadets thanks to a £1,000 bursary awarded by Hillstreet Shopping Centre.

The Middlesbrough Sea Cadets were presented with the cheque by Commanding Officer, Petty Officer (SCC) Matthew Stamp, at the annual Royal Navy Parade (RNP), at TS Erimus – their Albert Park base.

The Sea Cadets recruit youngsters from all over Middlesbrough, many from deprived areas. In January 2017, the group was left devastated when serious flooding to the ground floor forced the building to close until it could be restored to a safe condition.

Chief Petty Officer (SCC) Michelle Bell, Executive Officer, said: “The cadets and staff were overjoyed at hearing the fantastic news of winning the £1,000 Hillstreet Bursary and would like to thank everyone involved for choosing the cadets to win.

“It meant we could hold the RNP safe in the knowledge that the floor was not going to collapse and we are now able to use the full main deck for cadet activities once more.”

Middlesbrough Sea Cadets is a charity that has supported the youth of Middlesbrough since 1942, with 35 cadets and 8 volunteers currently on its register.

It takes youngsters aged 10 to 18 and provides opportunities for personal development, by learning new skills and working in teams – offering an environment where young people find new confidence and inspiration.

The remainder of the bursary money will go towards roof repairs and the funding of a unit Trinity 500 rowing boat, which is much needed to allow the cadets to obtain the boating qualifications they need to advance.

Michelle added: “We are situated in a deprived area. We try to offer help for parents who may not be able to afford to send their child away on courses and cadet activities, so the funding will help with that too.”

The Sea Cadets were among 100 Teesside community groups to apply for the shopping centre’s Hillstreet Bursary, now in its eighth year, which aims to support community groups, schools, charities and organisations with one-off grants throughout the year.

This year’s four runners up were Teesside Sportability Club, North Ormesby Trinity Youth Project, Teesside Ability Support Centre and Corpus Christi Primary School, which all received £500 each to go towards sustaining the fantastic work they do in their local communities.

Peter Drabble, Hillstreet Shopping Centre Manager, said: “The bursary scheme received a record number of entries this year and I am delighted the funds are able to make such a vital difference to those successful applicants.

“Everyone at Hillstreet Shopping Centre takes pride in doing all we can to help the local community and I’d like to thank everyone who applied for a bursary this year, your hard work makes Middlesbrough a town to be proud of.”